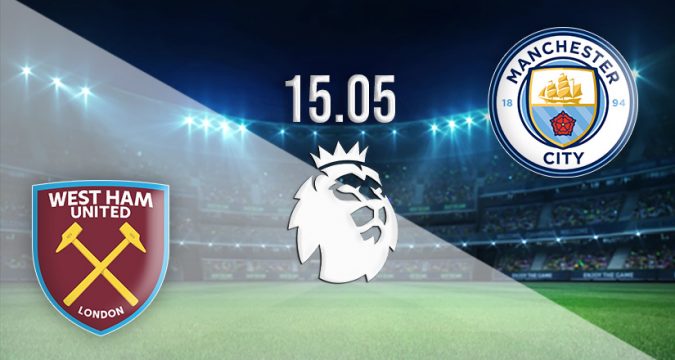 After restoring their three-point at the top of the table ahead of second-placed Liverpool on Wednesday with a thumping 5-1 win at Wolves, Manchester City travel to the London Stadium on Sunday at 14:00GMT to face a West Ham side that bounced back to winning ways with a dominant 4-0 with at Norwich last Sunday.

Can West Ham Throw the Title Race Wide Open with a Win over Man City?

David Moyes’ side will be smarting from their elimination from the UEFA Europa League at the semi-final stage; they will be looking to ensure they qualify for the tournament next season.

This dynamic was shown when the Hammers bounced back with a thumping 4-0 win against relegated Norwich.

With sixth-placed Manchester United within their sights, West Ham will be looking for a win against the Champions to bolster their chances of qualifying for the Europa League next season.

Can Man City Stretch their Lead over Liverpool to Six Points with the Reds not in League Action until Tuesday?

Pep Guardiola’s side re-established their three-point lead at the top with a dominant 5-1 win at Wolves.

With Liverpool not in premier league action until Tuesday at Southampton, City can stretch their lead to six points with a win at the Olympic stadium, which will all but guarantee they retain the title given their superior goal difference over Liverpool.

Guardiola will be aware of the anger West Ham pose when they are on form and will guard against complacency within the ranks as he seeks to seal consecutive titles.

The Hammers ended their four-match winless run in the league with a 4-0 win at Norwich.

Over the last six matches, Moyes’ men have collected seven points and dropped 11 in the process.

They have won twice, drawn once, and lost three times in this run.

Manchester City have been in sparkling form in the league over the last five matches.

Since their 2-2 draw against Liverpool, the Citizens have won the last five matches as they have taken control of the title race with two matches remaining.

In the run of five wins, they have scored a whopping 22 goals while conceding just two in the process.

Angelo Ogbonna is still unavailable for West Ham ahead of the final two matches of the season. The 33-year-old centre-back ruptured his cruciate ligament on November 8th, 2021, and has missed 39 matches for the Hammers since.

Moyes will also be without the suspended left-back Aaron Cresswell for the clash with Manchester City on Sunday.

Pep Guardiola is facing a defensive crisis ahead of the clash with West Ham with injuries to Ruben Dias and Aymeric Laporte likely to be missing from the first-team selection.

Laporte was taken off during the 5-1 win at Wolves in a defence that was already stretched due to the absence of Dias.

Benjamin Mendy is also unavailable after his suspension from the squad earlier in the season.

The forward grabbed two goals in the 4-0 win at Norwich as he underlined his cutting edge and growing importance to Moyes’ men.

Benrahma’s forward play will be crucial for West Ham’s ability to penetrate against Manchester City, especially on rapid counterattacks against the league leaders.

With the brilliant Belgian grabbing four goals against Wolves, Manchester City will hope that their star midfielder will be in irresistible form at the London Stadium.

The playmaker will be crucial for City as they seek to seal the league title ahead of Liverpool by winning at West Ham, and with just one match remaining in the league season after that.

Pep Guardiola’s side will settle down quickly and dictate possession and the tempo of the match with their passing and pressure.

West Ham will seek to be solid and compact in their approach, denying City’s attacking players any spaces to attack.

Manchester City are favourites to win the match and bolster their title credentials ahead of Liverpool this season.

Make sure to bet on West Ham vs Man City with 22Bet!