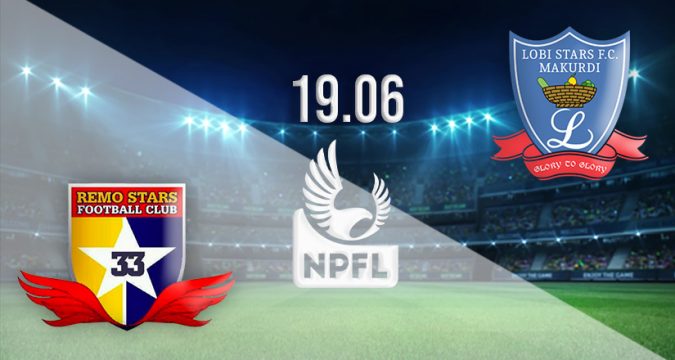 Remo Stars, who are 5th on the NPFL table, will host the bottom-half side Lobi Stars at the Niyot Wine and Drink Store Stadium on Sunday at 16:00GMT as both clubs look to bolster their positions on the table with just six matches remaining in this season’s campaign.

Can Remo Stars Bounce Back to Winning Ways in the Clash with Lobi Stars?

Last time out in the NPFL, Remo Stars lost 1-0 away to Akwa United; this followed a run of two games without defeat in the league.

The clash with Lobi Stars provides a platform for Remo to bounce back to winning ways as they seek to bolster their position on the NPFL table in the run-in.

Remo are currently 5th on the table and trail the league leaders Rivers United by 20 points. Although the short-term goal will be to close this gap as much as possible, Remo Stars would be disappointed by the way their title challenge fizzled out with inconsistent league form.

Can Lobi Stars maintain their Three-Match Unbeaten Run and Extend it to Four Consecutive Matches?

Although Lobi Stars are in the mid-table positions, 14th, they are just three points above the drop zone. This means that they still need points on board in the remaining six matches to guarantee their safety.

Lobi Stars have also been in a good four-match unbeaten run that has seen them open the gap to the teams severely threatened by relegation.

However, with seven matches remaining in the season, Lobi Stars are not safe yet. They still need points on board to climb the table and bolster their survival chances. The clash with Remo Stars away from home will be an important opportunity for Lobi to get a favourable result and add some points to their tally.

Remo have won just once in their last five outings in the NPFL; this run of form has seen a massive gap open up between the Stars and Rivers Utd at the top (20 points) and Plateau Utd in second place (10 points).

Remo have lost three times and drawn once in this run of five matches. The win came in the NPFL clash against Gombe United, which ended 1-0 in favour of Remo.

In this run of five outings, Remo Stars have kept a single clean sheet in the 1-0 win over Gombe United; this highlights their challenge in maintaining a title challenge this season.

Since their 2-1 defeat to Enyimba, Lobi Stars have seen an upturn in form in recent matches as they have gone four matches in the NPFL without defeat.

In their last five league outings, Lobi Stars have won twice, drawn twice, and lost once; they have collected eight points and dropped seven. This run of form has seen them open up a three-point gap from the relegation zone.

Lobi Stars have also kept two clean sheets in this run in the matches against Sunshine Stars (0-0) and MFM (0-0). The two victories in this run came against Kwara United (3-1) and Heartland (2-1).

The 20-year-old attacker is a crucial weapon for Remo Stars in their attacking play. His link-up play, pace, and clinical finishing in front of goal are essential aspects that make him important for the clash with Remo Stars.

The 21-year-old Nigerian professional has nine goals and four assists in 22 appearances this season for Lobi Stars. This underscores his importance to the club.

His attacking threat will be crucial for Lobi Stars on Sunday as they seek to get the points they need to ensure survival in the NPFL.

Remo Stars will look to dominate the match by bossing possession and dictating the tempo.

Lobi Stars will employ a medium-to-low press with priority given to solidity and compactness to make it hard for Remo Stars to play through and create chances.

This match will end in a draw with both sides settling for a draw.

Make sure to bet on Remo Stars vs Lobi Stars with 22Bet!