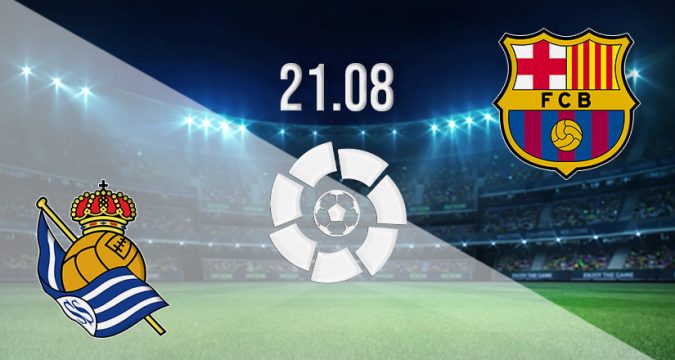 We enter round two of the new Spanish La Liga season with a full programme of matches played from Friday to Monday in what promises to be an action-packed weekend. Three games go ahead on Sunday, with the main attraction pairing Real Sociedad and Barcelona from 21:00 GMT. This match will be played before a sell-out audience, boosted by the millions of armchair fans following live on television.

Real Sociedad enjoy home advantage as their fans prepare to support the team, hoping to cheer them on to a huge three points. To achieve that, Sociedad must defeat a new-look Barcelona side that, somehow, managed to strengthen their squad in the off-season despite having several restrictions hanging over them. This will be a fiercely competitive match, and although many pundits have picked Barca to win on the road while their new starts settle in, this could be an ideal time for Real Sociedad to score an upset.

Sociedad and Barca are no strangers to meeting in competitive action, with the rivals involved in two La Liga meetings, with Barcelona doing the double, collecting a maximum of six points. The first meeting was played at the Camp Nou, where the hosts ran out convincing 4-2 victors before edging a 1-0 win at this venue. The head-to-head stats show Barca has dominated this fixture over the years with 37 wins, eight for Real Sociedad, and a dozen draws.

Real race off to a winning start

Real Sociedad was one of just seven La Liga clubs who were good enough to bag the winning start everyone connected to the club had been dreaming of. This promises to be a big season, and with Real Madrid, Barcelona and Atletico Madrid all strengthening in the summer, fans are expecting a fiercely competitive and entertaining campaign.

Real Sociedad is one of the clubs pundits expect to be challenging for the European places, and they bagged three points at the first time of asking thanks to a 1-0 victory achieved over Cadiz last Sunday. That was a match they were expected to win, despite being on the road, and full credit must go to the players for getting the result they were after, keeping a clean sheet and picking up three points at the earliest opportunity.

Kubo was the player that made the difference on that visit to Cadiz, scoring what proved to be the winning goal with 24 minutes on the clock to edge their noses in front. Real Sociedad created enough chances to get the second and put this game to bed, but they are still lacking a bit of sharpness in attacking areas of the field, something that will improve the more games they play. This is a team that, if playing to the best of their ability, is a match for any opponent in Spain.

Barcelona is back in business

Barcelona endured a torrid time of things last year as they lost star player and fans’ favourite Lionel Messi to PSG. The club’s millions of followers hope for a reunion with the little magician one day. Still, the move was needed to help balance the books and bring the club in line with financial fair play rules and the penalties imposed for spending years on the edge, pushing their luck with overspending and running at a sizeable loss.

This time last year, Barcelona was feeling sorry for themselves. Although they eventually found their feet and secured a decent finish in La Liga – without troubling eventual champions Real Madrid – it was a difficult opening few weeks. They failed to get off the mark with a win on matchday one, held to a draw, meaning they were one of six teams from the top tier of Spanish football that collected a point on matchday one, although fans will view it as dropping two points. This is a club that, even in its darkest hour, maintains high standards and even higher expectations.

Barca enjoyed home advantage for their opening match, and with Rayo Vallecano, the opposition, a win for the locals at the Camp Nou was expected. Barca ended that match with 10 men following the sending off of Busquets for a second bookable offence, but that came too late in the day to be used as an excuse. They had 21 shots at goal but managed to put just six of those on target, something we will see an improvement in this weekend.

Real Sociedad got the start they were after on the road last weekend and now have the opportunity to add another three points in their opening home fixture of the campaign. Win this match, collecting the points against Barcelona, and it will keep Sociedad up with the early pace-setters while sending out a message of intent for the rest of the campaign.

Barcelona knows they should have done better last week with the number of chances they had and having their opponents on the ropes for long periods of the match. Sharpness, fitness, and an eye for goal will come in the near future, but fans must be patient with the players as they begin to settle into the demands of the season. This year won’t be perfect, but there is a lot of quality in this Barcelona team, and we expect them to be battling with Real Madrid for the title again.

Fans will be hoping for an entertaining game and many more goals than we saw from these two clubs on matchday one. The match will be shown live on television, and if both Real Sociedad and Barcelona improve in the final third of the field, they will put on a show.

Real Sociedad are available at odds of 3.26 with 22bet to win this match, or you can back Barcelona for the three points at 2.115. Will we see another level finish for the away team? Two points from six wouldn’t be ideal, but it’s something the club can build from, and you can support the level finish in your weekend predictions with 22bet offering members 3.64.

Make sure to bet on Real Sociedad v Barcelona with 22Bet!