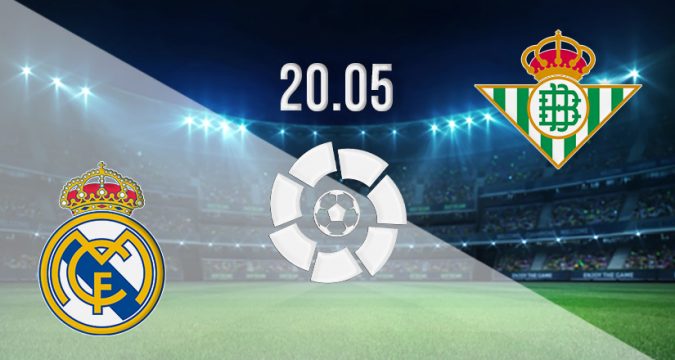 The European football season is beginning to wind down with time running out in England, Italy, Germany and France. We are also into the last few La Liga season matches, with ten fixtures scheduled for Sunday, all with 17:30 GMT start times.

Real Madrid have already won the league title with a points advantage over the likes of Barcelona and Sevilla, which means they can’t be caught. But there’s still plenty to play for across the league with crucial points up for grabs and places to be won on Sunday.

In this preview, we focus on Real Madrid at home to Real Betis, a match you can follow on television and live streaming apps downloaded to your smartphone. Read on as we preview Real Madrid v Real Betis, checking on the form of both teams and hunting for any clues that may help make a strong prediction on the outcome of this match.

The stats tell us to prepare for a tight 90 minutes after Real Madrid won 1-0 in the reverse of this fixture back in August. Daniel Carvajal scored the winning goal that day on the hour mark, and it was the fifth match involving these sides when there was one goal or less between the sides.

Madrid are home and hosed

Real Madrid started this season as the hot favourites to win the La Liga title back from city rivals Atletico Madrid. With last season’s champions losing some of their best players in the transfer windows and Barcelona’s off-field financial problems that led to them releasing star man Lionel Messi, most pundits were strong in their support for Blancos.

They did what was expected of them and in style too, winning La Liga with a few weeks to spare, ending as a side fully deserving of their winner’s medal. Not only are they the champions of Spain once again – breaking their record – they are in the final of the UEFA Champions League, where they’ll get the chance to smash another record of theirs.

Not many teams can successfully juggle their domestic and European campaigns, especially when playing in one of Europe’s top five leagues and in the Champions League, but that’s exactly what Blancos have achieved. They wrapped up the league a few weeks ago, which allowed them to concentrate on their upcoming Champions League final with Liverpool.

Madrid are tapering off

There have already been signs of this Madrid side tapering down in the league and shifting the focus to the Champions League. They lost 1-0 in a Madrid derby away to Atletico earlier this month, with the only goal of the game scored by Carrasco from the penalty spot on 40 minutes. It was a defeat for Real Madrid but already having the title in the bag helped them deal with it.

They bounced back in great style when smashing Levante last 6-0 last Thursday in front of their fans in a result that showed this team has quality throughout. Even the fringe, youth and squad players coming through have something to offer, and they made a bid for their place in the starting line-up against Liverpool in a few weeks.

Real Madrid’s goals in that emphatic win over Levante were scored by Mendy, Benzema, Rodyrygo and a jaw-dropping hattrick from Junior. The latter was the standout player on the park that day, and his goals proved to be the main difference between the victors and losers, but it’s likely Madrid would have secured the points regardless.

Betis are battling for the top four

Real Betis have enjoyed a fantastic season that will live long in the fans’ memories, but it’s not over yet. They still have much work to do if they are to get something to show for their commitment with a European finish still in their sights.

Real Betis spent much of 2022 in and around the top four, with supporters dreaming of their team finishing in the prizes and securing a place in next season’s Champions League. They want to see their team mix it with the cream of the crop, but a strong finish is needed if they are to secure European football of any description for next season.

Real Betis have watched on as their form has deserted them when it matters most despite punching above their weight for many months. They enter this match on the back of a rocky run of form that has returned just won one on the back of two draws and a pair of defeats. One final big push is required if they are to get over the line.

The one win in that period came against Valencia on the road recently when claiming a crucial and overdue three points. The goals in that game were scored by Da Silva on 57, Canales on 87 and Iglesias on 90 minutes. It was a morale-boosting win and one fans hope will provides just the tonic ahead of a grandstand finish.

Real Madrid are the home team with the better form of the two teams involved here. They are also the champions but have Champions League final to look forward to, and that will decide how strong a starting line-up they go with here. They won’t want to risk injury to any of their star performers that would leave them weakened ahead of that season-defining match with EPL side Liverpool.

Betis have more to play for here, and despite being the visiting team, they know this is a must-win match. Failure to take maximum points from this fixture would finish their chances of reaching the Champions League next season and perhaps even the Europa League. They deserve better than missing Europe, which will be the driving force behind their preparations.

Make sure to bet on Real Madrid v Real Betis with 22Bet!