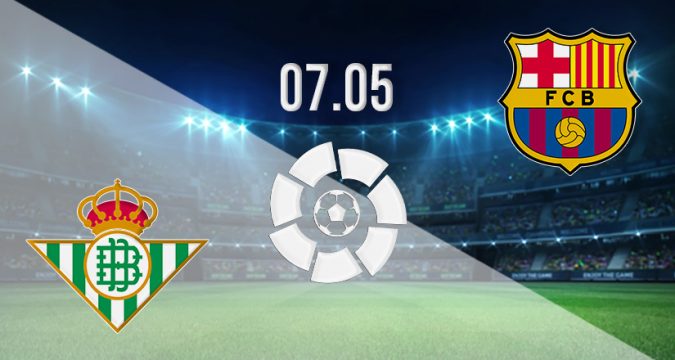 Barcelona will be looking to seal second-place position when they travel to face a Real Betis side that has not won in their last three La Liga outings, on Saturday at the Benito Villamarin starting at 20:00GMT.

Can Betis get back to Winning Ways after a Three-Match Winless Run?

Real Betis’ fight for the top four has lost steam in recent matches as they have gone three matches without a win.

They currently sit 5th on the table, three points behind fourth-placed Atletico Madrid and two ahead of sixth-placed Real Sociedad.

Manuel Pellegrini’s side will need a good result in the clash with Barcelona if they are to bolster their chances of qualifying for next season’s Champions League, with four matches remaining in the season.

Can Barcelona make it Two Wins on the Bounce as they seek to Fortify Second Spot?

Since being eliminated from the Europa League by Eintracht Frankfurt, Barcelona’s form has suffered considerably. However, they are still in a prime position to finish second behind newly-crowned Champions Real Madrid.

The clash away at Real Betis will be a test for Xavi’s men has they seek to re-capture the consistency that has served them since the Spaniard took charge as manager.

They will expect a tough match at the Benito Villamarin on Saturday, but Xavi will hope that his Blaugrana charges are equal to the task.

Real Betis have followed two consecutive wins with three outings in La Liga without a win. In their last six matches in the league, Pellegrini’s men have collected nine points and dropped nine.

With only two wins, three draws, and a loss, Pellegrini will hope his side can up their tempo in the match against Barcelona and regain the edge that saw them occupy a top-four place for large swathes of the season.

The Blaugrana have not done enough to guarantee a top-four spot at the end of the season. They have established a five-point gap to fourth-placed Atletico Madrid. Significantly, Barcelona are just two points ahead of Sevilla in third.

Xavi will be hoping to re-capture the consistency that has defined is tenure at Barcelona to seal their position in the top-four and fortify their second-place finish with four matches remaining in the season.

Pellegrini will be without right-back Martin Montoya; the 31-year-old is recovering from an Achilles tendon problem since January 4th, 2022.

The Spaniard has missed 25 matches for Betis since his injury, and he is a major doubt for the upcoming clash with Barcelona.

The forward has grabbed 13 goals and 1 assist in 39 appearances for Pellegrini’s side this season.

Iglesias’ link-up with Fekir, Ruibal, and Tello in attacking areas is crucial to giving Betis the cutting edge in front of goal.

Iglesias will be essential for Betis as they seek to win against a Barcelona side regaining their form.

The Dutch international has grabbed 12 goals with 2 assists in 33 appearances for Barcelona this term.

Depay, whenever he has been fit, has provided a crucial impetus for the Blaugrana in attacking areas.

His penetration down the wide areas is essential for Xavi’s side in breaking down opponents and creating chances.

Barcelona will seek to dominate possession against Real Betis. Betis will focus on nullifying the threat posed by Barcelona by being compact and solid in their approach.

Pellegrini’s side will also seek to leverage their possession to attack with pace and use counter-attacks to cause Barcelona trouble at the back.

Barcelona are the favourites to win all three points.

Make sure to bet on Real Betis vs Barcelona with 22Bet!