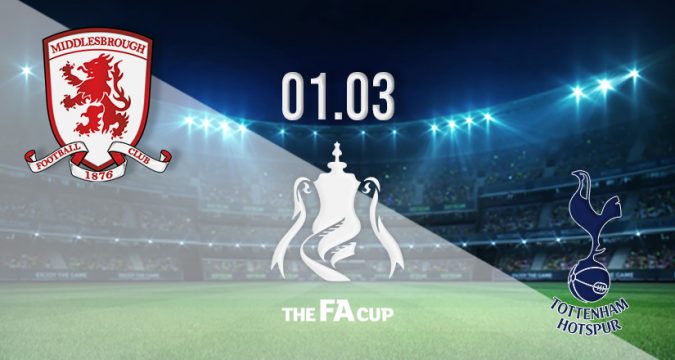 Middlesbrough produced one of the shocks of the round in the previous round of the FA Cup, as they famously knocked out Manchester United at Old Trafford. They will be looking for another shock win in the fifth round of the competition against Tottenham Hotspur at the Riverside on Tuesday.

The FA Cup presents Tottenham Hotspur’s only chance of silverware this season, and Antonio Conte will be looking to avoid the same fate that fell on the shoulders of Manchester United on Tuesday evening. Spurs haven’t won a major trophy for over ten years since their success in the League Cup, and one of the reasons why Conte was appointed was to end that wait.

Tottenham will play away from home in the competition for the first time this season on Tuesday. Both previous ties have been played in North London, as they managed to survive an almighty scare to see off Morecambe in the third round. An all-Premier League tie lay in wait in the fourth round, but Spurs were just too strong for Brighton & Hove Albion. Harry Kane scored twice in a 3-1 win.

Boro will be looking for some FA Cup history on Tuesday, as they hope to eliminate top-tier clubs in successive rounds for the first time since the 1991-92 season. They will need to be much better than they were in their last outing, as they lost 3-2 away from home against Barnsley on Saturday.

Boro knocked out Mansfield Town in the third round of the competition, before producing the biggest shock of the FA Cup this season in the fourth round against Manchester United. They went behind against United in the opening 25 minutes, but levelled with just under half an hour remaining through Matt Crooks. They eventually progressed after winning 8-7 on penalties.

Boro have picked up just one win in their previous 13 meetings against Tottenham in all competition. That victory came on the opening day of the 2008-09 Premier League season. Boro have lost eight of the 13 games that they have played against Spurs, which includes a defeat in the third round of the FA Cup in 2019-20.

This is one of the most intriguing FA Cup ties this week. Spurs should have the quality to edge past Boro, but the hosts have shown excellent character since the arrival of Chris Wilder. It will be a tight affair, but a Spurs 1-0 win is our pick.

Make sure to bet on Middlesbrough vs Tottenham Hotspur with 22Bet!