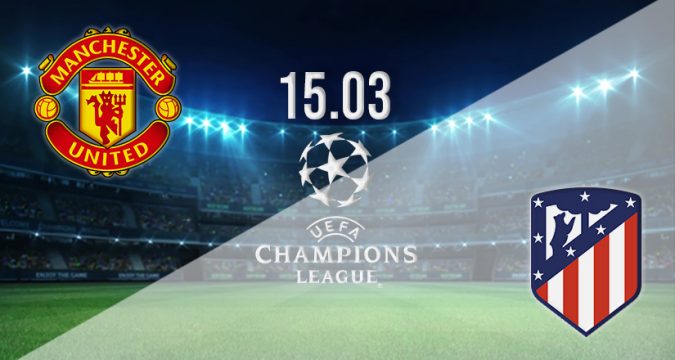 Manchester United host Atletico Madrid in a Premier League vs La Liga encounter at Old Trafford. These sides meet in the second leg of this UEFA Champions League Round of 16 match with a place in the quarter-finals at stake. The tie hangs in the balance following a 1-1 draw in Spain last time, and with no away goal rule in force this season. Only victory will do. Will the Red Devils progress, or can the current champions of Spanish football keep their dream of dominating Europe alive?

The tie is scheduled for a 20:00 GMT kick-off and will play out before a packed Old Trafford Stadium, with the majority of those in attendance cheering a home win. Those numbers will be boosted by the millions watching worldwide as the race to become kings of European football moves through the gears. There’s all to play for here, and followers are guaranteed an eventful night. Extra-time and penalties are available if required, but both sides would much prefer to get the job done in regulation time.

The head to head stats attached to this match tell us these teams have met only three times previously on competitive action. Rather surprisingly, Man Utd have never recorded a win over Atletico Madrid, with the Spaniards on one victory and two games ending in a draw. To maintain their hopes of winning this competition, United must make history and finally get that win over Madrid.

Manchester United warmed up for this match by playing their part in a five-goal thriller with Tottenham at Old Trafford on Sunday afternoon. The Red Devils enjoyed the home advantage again that day and knew they had to make it count if they were to boost their chance of making the top four and next season’s Champions League. Both Man Utd and Spurs were involved in a race to fill fourth spot and now, following Sunday’s 3-2 win for United, Tottenham have been removed from the running. The London club are facing another disappointing season and qualification for the Europa League.

In what was a game for the neutrals and armchair fans, we were treated to five goals with Man Utd winning 3-2. Cristiano Ronaldo scored a hattrick in that match, giving supporters a reminder that he still has the speed, skills and fitness to change games at this level. CR7 had blown hot and cold since returning to England from Juventus in the summer but Sunday’s showing was a rewind to his best form. He controlled the game and was the best player on the pitch. He’ll now want to find that consistency between now and the end of the season in England and Europe.

That emphatic win over Spurs was United’s second game of March with the other that hurtful 4-1 beating across the city at the Etihad Stadium. Defeat that day was expected as Man City look head and shoulders above the chasing pack this season and looked in the mood for a big derby win at home. But the manner of the defeat upset many United fans as their team barely put up a fight. What version of Man Utd will we see in this return to Champions League action? Viewers can’t wait to find out.

Atletico Madrid have been poor in La Liga this season and won’t be defending their title. The trophy looks set to be heading across the city to Real Madrid who are out in front and cruising, but there’s still plenty of football to be played in that competition. In the Champions League, Atletico know their best chance of going through to the next round came from making their home advantage count and beating Man Utd in Spain to grab a first leg lead. Things didn’t go to plan for the Spaniards with that match ending 1-1.

We last saw Madrid in action on Saturday when grabbing a 2-1 home victory over Cadiz. The three points was expected that day and they were favourites to get the win but fans would have preferred a more comfortable margin of victory. The current champions of Spain were forced to dig deep, battling past their stubborn opponents thanks to goals from Sequeira and de Paul.

Atletico needed the goal from de Paul on 68 minutes to get the win that day after Cadiz had drawn level on the stroke of halftime. It was a nervy last 30 minutes, made even more tense for the Madrid support when Serrano Martinez was shown a red card near the end. Madrid held on for victory but it was a little too close for comfort. This match is different, this is a win at all costs affair with the result much more important than the performance.

Man Utd scored in Spain to take a draw back to England and that will fill the squad with confidence but they still have work to do here. They know only a win would see them progress in this competition and that won’t come easy against the battling Madrid. Man Utd must rediscover their form from the weekend when destroying Spurs.

Atletico Madrid may have missed a chance to take a lead to Manchester but the tie remains alive and anything can happen ahead of this second leg. The visitors know their hosts are dangerous in attack but are also fragile in defence. Atletico must be calm at the back but taa chances going forward if they are to sneak through this tie. The game is there to be won.

The pre-match betting odds attached to this fixture by 22bet has Manchester United at 2.155 for the win with Atletico Madrid 3.56 and a draw 3.52. In addition to the match betting prices, there are also several specials available, including both teams to score, half time/full time, total goals, handicap, first goalscorer and more.

Make sure to bet on Man Utd v Atletico Madrid with 22Bet!