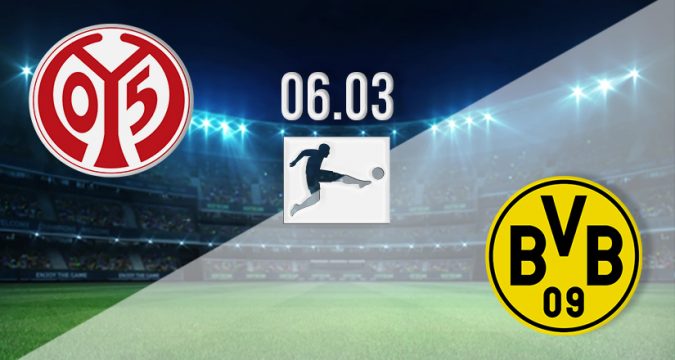 Borussia Dortmund will be looking to get back to winning ways after last week’s disappointing 1-1 draw with FC Augsburg, which dented their hopes for a title race, when they travel to face Mainz 05 on Sunday at 15:30 GMT.

Can Mainz 05 Get Back to Winning Ways against Borussia Dortmund?

Mainz’s three-match unbeaten run in the Bundesliga was halted last week in a  3-1 defeat to Union Berlin. They will be looking to bounce back to winning ways as they seek to move up from the mid-table and into European places.

Currently, Mainz 05 lie 9th on the Bundesliga table with 24 points, which is six points behind 4th-placed RB Leipzig. This shows that Mainz 05 still have a lot to fight for in the run-in.

They have a chance to qualify for the Europa League of Europa Conference League for next season, which is a massive motivation and drive for the club. This underscores the importance of the clash with Dortmund on Sunday.

Can Borussia Dortmund Regain Consistency to Trouble Bayern’s Stroll to the Title?

Last week’s 1-1 draw at FC Augsburg allowed Bayern to extend their lead at the top of the table to an ominous looking eight points.

The match at Mainz 05 will be crucial for Dortmund as they seek to cut Bayern’s lead and turn a procession into a title race in the Bundesliga.

Dortmund’s challenge this season has been their failure to compete with the relentlessness and consistency of Bayern Munich in churning results and staying ahead on the table.

Dortmund also need to ensure that their hold on second place does not come into question by the in-form Leverkusen who are just six points behind them in third on the Bundesliga log.

Mainz 05 have also been in a fairly decent run of form. In their last six outings, they have collected 10 points and dropped 8. In this run, they have won three matches, drawn one, and lost two.

The two losses include the 3-1 reverse to Union Berlin, which saw Union move to 7th on the table, three points ahead of 9th-placed Mainz.

Dortmund have been in fairly decent form over the last six rounds of Bundesliga fixtures. However, their challenge is that Bayern have been in even better form, which has led to the expansion of the gap between the two teams on the table.

Mainz 05 will be without centre-back Jeremiah St. Juste; the 25-year-old is recovering from a shoulder injury he suffered on February 10th, 2022.

Mainz will also miss the services of central midfielder Dominik Kohr and centre-back Alexander Hack; both players received yellow card suspensions on February 28th, 2022. They will be back available for selection from March 7th.

Erling Haaland is a doubt for the clash with Mainz as he works to regain his fitness. Youssoufa Moukoko (torn muscle fibre), Giovanni Reyna (hamstring injury), Dan-and Axel Zagadou (muscle fibre tear) are also out of the Mainz 05 clash.

Dortmund are also without the services of attacking midfielder Marco Reus who suffered a knock on 25th February, 2022. Right-back Thomas Meunier is also likely to miss the match on Sunday with a torn tendon.

The striker will be crucial for Mainz in the match against Dortmund. His movement, physicality, pace, and creativity will be important for Mainz’s hopes of getting something from the match.

The Belgian international is crucial for Dortmund, especially with Haaland and Reus missing. He will be crucial for Borussia in the match against Mainz 05.

Expect Dortmund to dominate the match and play on the front foot. Mainz will strategically defend and assume a pragmatic formation to contain the threat posed by Dortmund.

With the absences Dortmund are suffering, a draw is the most likely result in this match.

Make sure to bet on Mainz 05 vs Dortmund with 22Bet!