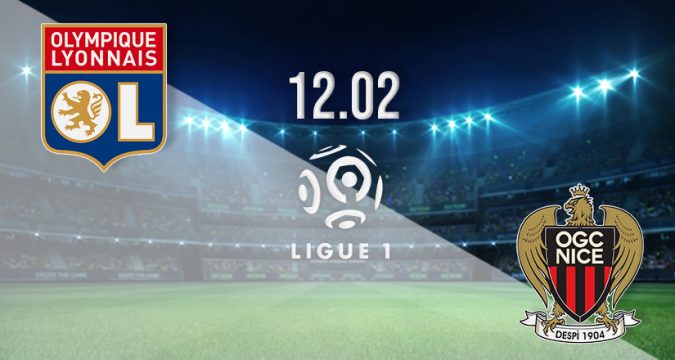 Lyon and Nice will both be looking to bounce back from defeats in Ligue 1 in their previous matches when they face each other on Saturday at 21:00GMT.

Can Lyon Cut the Gap to Third-Placed Nice and Sustain a Fight for Champions League Qualification?

Languishing in eighth on the Ligue 1 table, Lyon will be looking to upset Nice and boost their charge towards the Champions League places.

Currently, Lyon are eight points behind Nice in third place, which means a win on Saturday will cut this gap to five points and give them a chance of Catching Nice as the French league season picks up steam.

With home advantage, Lyon have the best chance to prevent Nice from extending the gap between them to 11 points, which will be very hard to overhaul as the season is well into the second half.

Can Nice Get Back to Winning Ways after the Surprise Slip-up at Home to Clermont Foot?

After Nice surprisingly lost 1-0 to Clermont Foot, Nice will be looking to bounce back and continue pushing for a Champions League spot with Marseille in second.

Given they are 14 points behind league leaders PSG, a title tilt is beyond them; concentration, therefore, is on qualifying for the Champions League next season.

A win over Lyon will go a long to restoring confidence in the Nice camp and restoring their fight for qualifying inside the top three in Ligue 1.

It will also hand Lyon a massive blow as they try to fight for a top three finish.

Lyon lost their last outing in Ligue 2-0 away at Monaco. This defeat came on the back of three consecutive wins in the league.

In the last six rounds of Ligue 1 fixtures, Lyon have won three, drawn two and lost one. They have hauled 11 points from a possible 18.

At home, Lyon are unbeaten in the last four rounds of matches. They have won two and drawn two in this run. They will be looking to parlay their home form to upset the in-form Nice on Saturday.

Nice are the most in-form team in Ligue 1 over the last six rounds of fixtures. In this run, they have won five and lost one. They have collected 15 points and dropped three.

This record is better than PSG, who have collected 14 points and dropped four in the same period.

Away from home, Nice have displayed imperious form; they have haled 16 points and dropped on two in the last six outings. They have won five and drawn one.

They will be looking to bounce back to form with a win away at Lyon on Saturday.

Lyon will be without the recovering attacking midfielder Rayan Cherki; the 18-year-old suffered a fracture to his metatarsal on February 9th and is expected to be back in May 9th.

Attacking midfielder Jeff Reine-Adelaide will also miss the clash with Nice on Saturday as the 24-yer-old nurses his ruptured cruciate ligament.

Left winger Lenny Pintor is also out with a ruptured cruciate ligament; the 21-year-old will be unavailable for selection for the fixture against Nice.

Nice will be without Youcef Atal for the match away at Lyon. The 25-year-old right-back is recovering from a shoulder injury suffered on February 7th 2022.

Nice will also have several players carrying the risk of suspension; these include centre-back, right midfielder Hicham Boudaoui, and centre-back Jean-Clair Todibo, who all are on 4 yellow cards.

The French professionals is a crucial part of the Lyon striking approach. He has been central to Lyon’s form this season with goals and leading the line upfront.

His physical presence and clinical edge in front of goal will be crucial as Lyon bid to beat Nice on Saturday.

The striker’s partnership with Gouiri will be central to Nice’s chances of taking all three points against Lyon. Delort provides the goals, creative play, and assists for Nice.

Expect Lyon to dominate possession. Nice will be solid and compact in their approach; they will cede possession and look to attack in transition.

Nice are highly favoured to come out on top in this match and take all three points on Saturday.

Make sure to bet on Lyon vs Nice with 22Bet!