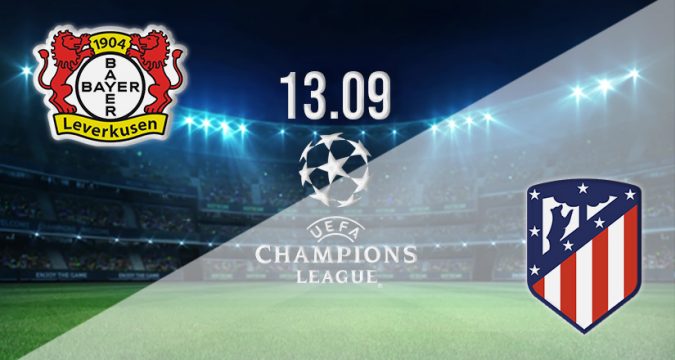 Having made a winning start to their Champions League Group B campaign in their 2-1 triumph over Porto, Atletico Madrid will be looking to make it two wins out of two when they travel to Bay Arena on Tuesday to face Leverkusen at 20:00 GMT.

Can Leverkusen Bounce Back to Winning Ways in the Champions League?

Leverkusen will be looking to salvage their standing in Group B when they face Atletico Madrid on Tuesday, following their 2-1 loss away to Club Brugge on matchday 1.

Gerardo Seoane will be looking to find the right tactical approach to nullify the threats posed by Atletico while maintaining his side’s ability to pose an attacking threat to the Spanish side.

Leverkusen will also be looking to bounce back to winning ways from their 2-2 draw against Hertha on Saturday. The team’s overall form has been poor this season, and Seoane has been searching for a formula to get them performing at a high level.

Can Atletico make it two wins out of two in Group B?

Atletico are unbeaten in four matches (three in La Liga and one in the Champions League). Their European campaign began with a 2-1 triumph at home over Portuguese side Porto.

In La Liga, they responded to their 0-2 loss at home to Villarreal with three outings in which they are unbeaten. They have had two wins against Valencia (0-1) and Celta Vigo (4-1) while drawing 1-1 against Real Sociedad.

Diego Simeone will be looking to improve his side’s consistency this season. Although they have had brilliant performances, they have not kept these levels up in all their matches.

As a result, they have dropped five points, and they are currently on 10 points after five La Liga outings, some three points behind table toppers Barcelona with 13 points. Real Madrid, with their 100% record have a game in hand.

Leverkusen lost three times in their opening three Bundesliga fixtures this season in a nightmare start to their league season. Although they won their fourth match 3-0 away to Mainz, they have not won again since.

Seaone’s side have scored seven goals in the Bundesliga all season while conceding nine goals in the process. They have kept a clean sheet just once this season.

In Europe, they opened their campaign with a 1-0 defeat away to Club Brugge. With this run of form, Seoane will be looking to get his side to rally in the massive clash against Atletico on Thursday.

Atletico have lost just once in five outings in La Liga this season. The defeat came in a 0-2 results against in-form Villarreal at the Wanda Metropolitano.

Diego Simeone’s side have won three times and drawn once, which leaves them with 10 points and fourth on the La Liga table.

In their Champions League campaign, Simeone’s side opened their account with a narrow 2-1 home win against Porto, with the visiting side having a man sent off in the 81st minute.

Atletico will look to take this form to their away clash with Leverkusen in Germany on Tuesday as they look to consolidate their advantage at the top of Group B, and thus enhance their chances of qualifying from the group.

Patrik Schick, the 24-year-old Czech forward has two goals in six Bundesliga outings for Leverkusen this season. He has also scored one goal in the Champions League, in the 2-1 loss away to Club Brugge.

The striker is crucial in leading the line for Leverkusen. With his movement, pace, and work rate, Schick is important for the team in offering a possession outlet, defence-splitting runs, and a cutting edge in front of goal.

Schick will be important for Leverkusen in the clash with Atletico Madrid on Tuesday as the German side seek to play their way from a poor run of form to bolster their standing in Group B.

Felix has appeared five times for Atletico Madrid this season. He has not notched a goal in La Liga or the Champions League for Atletico yet. However, he is an important part of the team Simeone is likely to name to take on Leverkusen on Tuesday night.

Felix is suited to playing between the lines, creating chances with his passing, and opening defences with his runs into the box and in wide areas.

The Portuguese international will be important for Atletico’s creative spark alongside Alvaro Morata in attacking areas; he will be instrumental in creating chances for the team to bolster the chances of Simeone’s side walking from the Bay Arena with the targeted three points.

Leverkusen will be compact and solid in their approach to deny Atletico any spaces behind for their attacking players and wingbacks.

Atletico will also adopt a pragmatic approach with a medium press and a largely compact setup to nullify any counter-attacks or transition danger Leverkusen might pose.

Atletico have the quality, form, and experience to win away from home and walk away with the three points.

Make sure to bet on Leverkusen vs Atletico with 22Bet!