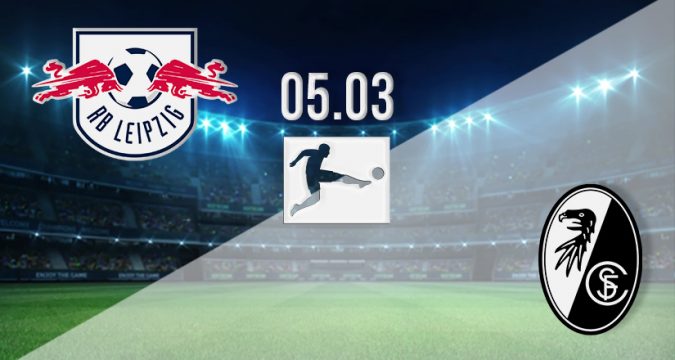 It is the side fourth on the table versus the side at fifth when Leipzig host Freiburg on Saturday at 18:30 GMT, as the two sides seek to take the sought-after fourth berth on the table and with it the coveted qualification for next season’s Champions League.

Leipzig have won the last three Bundesliga outings, which has given them a platform to boost their fight for a top-four berth.

Domenico Tedesco will be hoping to maintain this run when they host fellow top-four contenders Freiburg on Saturday evening.

Tedesco’s side currently occupy the fourth position, the final spot for Champions League qualification, courtesy of goal difference since they are level on 40 points with Saturday’s opponents Freiburg and Hoffenheim.

A win against Freiburg will be crucial in opening up a lead over their rivals in the race for a top-four berth.

Can SC Freiburg Extend their Unbeaten Run to Three Matches in the Bundesliga?

Freiburg are unbeaten in three Bundesliga outings; they have won two matches and drawn one, out of their last three fixtures.

A win will see them leapfrog Leipzig to fourth on the Bundesliga log.

Christian Streich’s side are looking to maintain some form of consistency in the Bundesliga to bolster their chances of finishing in the top four and participating in next season’s Champions League.

RB Leipzig have been in decent form in the last six rounds of Bundesliga fixtures. Domenico Tedesco’s men have won five and lost just once in this run. They have collected 15 points from the available 18.

This run of form is as good as the other best-performing teams in the Bundesliga in this sequence of matches; League leaders Bayern Munich and third-placed Leverkusen have also hauled 15 points in their last six fixtures.

Freiburg have suffered two defeats in their last six outings in the Bundesliga. In this run, Christian Streich’s men have collected 10 points and dropped 8 in the process.

This run comprises three wins, one draw and two losses. This sequence of results has seen them lose ground in the chase for Champions League-qualifying places on the Bundesliga table.

Christian Streich will be looking to re-capture consistency in the results, starting with the match away at RB Leipzig, to bolster their chances of finishing inside the top four.

Domenico Tedesco’s side have not reported any injuries in the lead-up to this match.

This is positive news for the managers as he prepares for a tough run in that will require them to be consistent and almost-flawless to ensure that they can take part in the Champions League next season.

Christian Streich will be without 22-year-old defensive midfielder Yannik Keitel in Saturday’s clash with RB Leipzig.

The midfielder is side-lined with a fractured toe since February 17th, 2022. A date for his return has not been set; the clash with RB Leipzig comes too soon for Keitel to feature.

Defensive midfielder Nicolas Hofler is also unavailable for the match against RB Leipzig because of yellow card suspension. The 31-year-old will be available to manager Christian Streich’s from March 7th, 2022.

The French professional is a talisman for RB Leipzig. The 24-year-old midfielder has grabbed 22 goals and 8 assists for Leipzig this season in 32 appearances.

These numbers underscore his importance to Leipzig and their fight for the top four in the Bundesliga.

Nkunku will be crucial for Leipzig in the match against Freiburg on Saturday because he can be decisive.

Petersen leads the line for Freiburg by himself with support from wide players – Sallai and Grifo, and midfield areas – W. Y. Jeong.

His goals, runs, hold-up play, and creative instincts are crucial in opening up spaces for other players and thus creating and scoring goals for Freiburg.

He will be a crucial cog for Freiburg in the match against Leipzig.

Expect RB Leipzig to dominate possession and territory in this match. Freiburg will also press across the pitch and seek to hurt Leipzig on the counter attack.

RB Leipzig will have too much for Freiburg and they will take all three points on Saturday.

Make sure to bet on Leipzig vs Freiburg with 22Bet!