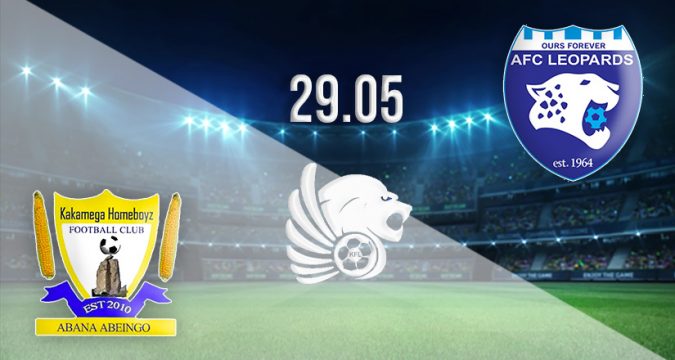 The chase for the Kenya Premier League title takes center stage this weekend when league leaders Homeboyz welcome tenth-placed AFC Leopards to Bukhungu Stadium on Sunday at 13:00GMT for a massive clash with ramifications at the top of the table with just three matches remaining in the season.

Can Homeboyz Maintain their Three-Point Lead at the Top of the Table with a Win at Home?

Homeboyz’s downturn in form has allowed second-placed Tusker (57 points) and third-placed Bandari (56 points) into the title race with three matches remaining in the KPL season.

With one win in the last five, Homeboyz need to beat AFC Leopards at Bukhungu stadium to bolster their chances of winning the title this season ahead of the in-form chasing park.

A win will, at least, see them maintain a three-point lead heading into the final two matches. A loss could potentially see Tusker draw level on 60 points and with a real chance of leapfrogging Homeboyz for the title.

Can AFC Leopards Blow the Title Race Wide Open with a Win at the League Leaders’ Home?

Tenth-placed AFC Leopards will be looking for a scalp when they travel to Bukhungu stadium on Sunday.

Ingwe have been in good form in recent matches, which gives them a real chance of causing a seismic upset in the title race this weekend at the home of the league leaders.

Although they are safe from relegation and they are too far to fight for the title, Ingwe will be fighting for bragging rights against Homeboyz who have their support base in Western Kenya as well, which makes this fixture a derby.

The league leaders have experienced a drop in their run of form in recent matches; this has allowed their dominant position to slip away and invite a title challenge from Tusker and Bandari in the run-in.

In their last five KPL outings, Homeboyz have won just once. They have also drawn three times and lost once. This run has produced six points from the available 15. Homeboyz’s run means that their once-dominant lead has been cut to just three points with three matches remaining in the season.

Homeboyz will be looking for a dominant performance to re-establish control of the title race heading into the final three matches as they seek to wrap up the title.

AFC Leopards have experienced an upsurge in form in recent matches in the KPL. Ingwe are unbeaten in their last three matches; they have won twice and drawn once in the process.

In their last five KPL fixtures, AFC Leopards have won twice, drawn twice, and lost once. They hauled eight points and dropped seven in the process.

Despite this upturn in form, their general performances this season have lacked the quality and consistency required to compete for the title or trouble the top half of the KPL table.

The striker will be crucial for Homeboyz as they try to re-establish their dominance in the league in the final three matches and thus clinching the title.

Mwana’s goals and all-around play will be crucial in bolstering Homeboyz in their clash against AFC Leopards on Sunday.

The Nigerian has been Ingwe’s leading attacker for most of the season, and his role is likely to be the same in the massive clash with Homeboyz at Bukhungu stadium.

Olaniyi offers pace to run in behind defenders, to utilize half-spaces and down the wide areas, while also offering a cutting edge in front of goal. These skills are crucial for AFC Leopards’ chances of getting a favorable result at Bukhungu on Sunday.

The way Olaniyi dovetails with his fellow Ingwe attackers allows him to showcase his creative side, which offers Ingwe further ammunition to hurt opponents. The striker will be important in the clash with Homeboyz.

Homeboyz will be forceful in their approach; they will start the quicker with more urgency, tempo, and dominance of the ball and territory of the pitch.

AFC will be solid and compact in their approach and try to catch Homeboyz on the break or through set-pieces.

Homeboyz will win the match and take a step towards the title ahead of challengers Tusker and Bandari.

Make sure to bet on Kakamega Homeboyz vs AFC Leopards with 22Bet!