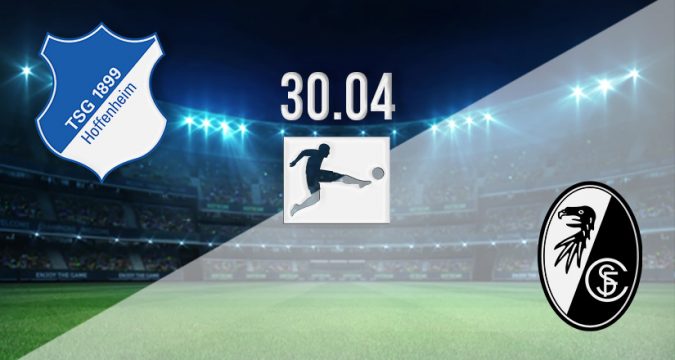 With three matches remaining in the Bundesliga season, and 12 points up for grabs, Freiburg are in with a shot at finishing in the top four. Fifth-placed Freiburg are two points behind fourth-placed RB Leipzig, and they face eight-placed Hoffenheim on Saturday at the Rhein-Neckar Arena starting at 17:30GMT.

Can Hoffenheim win their First Match in Six Bundesliga Outings?

Eighth-placed Hoffenheim will be looking to get maximum points to bolster their chances of finishing higher in the table and qualifying for either the UEFA Europa or UEFA Conference League tournaments for next season.

They will also be looking to end their winless run in the Bundesliga, which has lasted six matches when they clash with SC Freiburg on Saturday.

SC Freiburg will be disappointed because they could only draw 3-3 with Borussia Monchengladbach when fourth-placed Leipzig surprisingly lost 2-1 to Union Berlin.

However, they managed to cut the gap to fourth by a point down to two points with three matches remaining in the season.

Freiburg cannot afford to drop any points in the remaining three matches, starting with Saturday’s clash away at Hoffenheim, as they seek to overhaul Leipzig’s two-point lead at fourth place.

After winning four consecutive Bundesliga matches, Hoffenheim have not won in their last six outings.

The drop in form has seen them drop down to eight on the table and extinguished their chances of qualifying in the top four.

They have drawn three times and lost three times, including a run of three straight defeats and two consecutive draws.

In their last ten matches, Freiburg went unbeaten for six matches before the 4-1 defeat against Bayern Munich.

They bounced back straight away with two wins and a draw, as they stepped up their bid to qualify for the top four.

Hoffenheim will be missing four centre-backs from the clash against Freiburg; these include Chris Richards, Havard Nordtveit, Benjamin Hubner, and Ermin Bicakcic.

The 31-year-old Nordtveit and 22-year-old Richards are both out with hamstring injuries.

Freiburg will be without left winner Noah Weibhaupt for the clash against Hoffenheim. The 20-year-old is sidelined with a shoulder injury.

Centre-forward Nils Petersen is likely to miss the match with illness, whereas right winger Ken Schade is a doubt for the match in Hoffenheim with an abdominal strain.

Long-term absentee, defensive midfielder Yannick Keitel is not expected to be fit for the math at Hoffenheim. The 22-year-old is recovering from a fractured toe since February 17th, 2022.

The wide player is the driving force behind most of Hoffenheim’s attacking play this season. Bebou has seven goals and two assists in 26 appearances for Hoffenheim; these numbers underscore his importance to the team. He will be crucial in the clash with Freiburg.

The attacker has grabbed nine goals this season with six assists, in 31 appearances for Freiburg.

He is Freiburg’s most potent attacking weapon, and he will be crucial for the team when they face Hoffenheim on Saturday, as they seek to apply pressure on fourth-placed RB Leipzig in the remaining three matches.

Freiburg will seek to dominate the match by bossing possession with a direct and vertical attacking play. They will be under pressure to win the match as they fight for the top four.

SC Freiburg are favoured to win this match and take all three points.

Make sure to bet on Hoffenheim vs Freiburg with 22Bet!