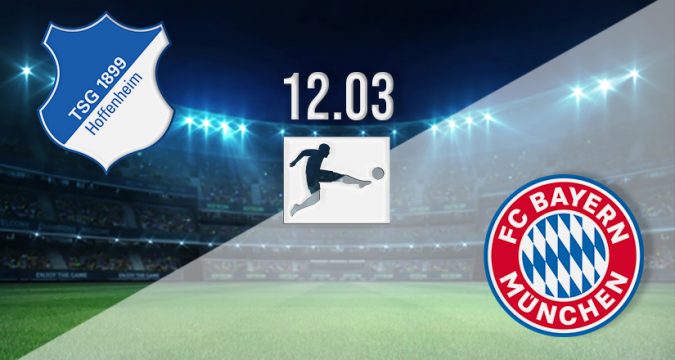 After Bayern Munich sealed qualification into the Champions League quarter-finals with a thumping 7-2 win against RB Salzburg in the second leg, and 8-2 on aggregate, attention will turn to the Bundesliga where they will travel to face in-form Hoffenheim on Saturday at 15:30 GMT.

Hoffenheim’s upturn in form has seen them win four straight Bundesliga matches. This run has elevated them into the top-four of the Bundesliga, two points behind third-placed Leverkusen and two clear of 5th-placed RB Leipzig.

They will go into the clash with league leaders Bayern Munich full of confidence and looking to cause an upset that might blow open the title race.

For Sebastian Hoeneß, they will be looking to enhance their standing in the top four by beating Bayern Munich, and keeping the chasing pack of RB Leipzig and SC Freiburg (both on 41 points) at bay.

Can Bayern Munich Get Back to Winning Ways After Their 1-1 Draw at Home to Leverkusen Last Time Out in the Bundesliga?

Bayern’s form in the league has stuttered in recent outings; they have won thrice, lost once, and drawn once, in the last six fixtures.

The good news is that Dortmund have been unable to take advantage of Bayern’s dropped points, which has allowed the Bavarians to extend their lead at the top to 9 points.

Julian Nagelsmann will be looking to bounce back from dropped points at home against Leverkusen last week with a win against Hoffenheim.

In their last six outings, Hoffenheim have collected 12points and dropped six. This run includes two consecutive losses and four consecutive wins in the league.

This run of form has allowed Sebastian Hoeneß’s side to climb up the table into fourth place, which is the last Champions League slot.

Hoeneß will be looking to maintain this run of form when they welcome league leaders Bayern on Saturday in a pivotal Bundesliga clash for both teams.

Nagelsmann’s side have dropped their high standards they have set throughout the season. In the last six rounds of Bundesliga fixtures, Bayern have won four times, drawn once, and lost once.

In this run, they have collected 13 points and dropped five; this record is only one point better than Hoffenheim.

Nagelsmann will be looking to bounce back to winning ways at Hoffenheim as the Bavarians seek to wrap up the league title race this season.

Hoeneß will be without several players due to injury and fitness issues. Centre-back Ermin Bicakcic (fitness), right winger Robert Skov (hamstring injury), and central midfielder Dennis Geiger (head injury), are all doubts for the clash with Bayern.

Nagelsmann will be without long-term absentee central midfielder Leo Gretzka; the 27-year-old is side-lined with hip problems.

Bayern will also be missing the services of Alphonso Davies with the 21-year-old side-lined with a heart condition. Central midfielder Corentin Tolisso is also missing with a torn muscle fibre, and is expected around March 18th, 2022.

As a part of a striking duo, Kramaric plays a crucial role for Hoffenheim alongside Bebou in pressing from the front and opening up defences. Kramaric will be crucial as Hoffenheim seek to upset the champions and league leaders on Saturday.

After grabbing a hat trick against RB Salzburg in midweek, Lewandowski underlined his credentials as one of the very best strikers in the world. He will play a starring role against Hoffenheim on Saturday for Bayern.

Expect Bayern to dominate possession and play on the front foot. Their pressing will look to force mistakes and create chances.

Hoffenheim will be pragmatic and solid. They will also play adventurously when in possession as they seek to push Bayern back and create chances.

Bayern will have too much for Hoffenheim and they will take all three points.

Make sure to bet on Hoffenheim vs Bayern with 22Bet!