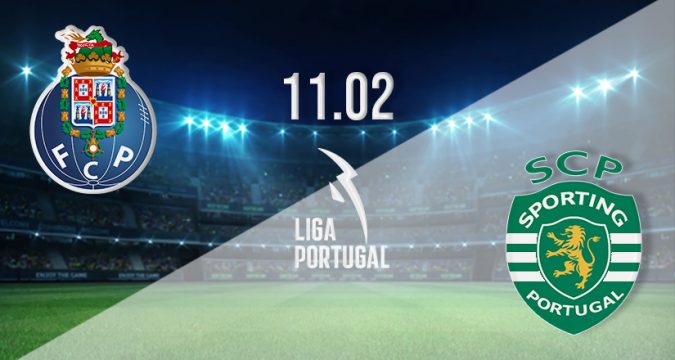 It will be a top-of-the-table clash on Friday when league leaders Porto take on the side in second place in the Primera Liga, Sporting, at 21:15GMT.

Can Porto Extend their Lead at the Top of the Primera Liga Table?

Porto enjoy a 6-point lead at the top of the Primera Liga ahead of their Friday opponents – Sporting.

Sérgio Conceição’s side have won their last 10 matches in the Primera Liga, scoring 27 goals in the process, and conceding just seven in this run.

Porto go into the match against Sporting on very good form, and with a strong lead at the top of the table. They will be hoping to extend this lead to 9 points by beating Sporting.

Can Sporting Reduce the Gap and Pull Porto into a Title Race?

While Porto have been perfect over the last ten matches, Sporting have found it difficult to maintain similar standards.

They have managed to win 8 and lose two matches in their last 10, which means that they have dropped 6 points while Porto have dropped none.

This explains the 6-point lead that Porto have built-up over Sporting on the Primera Liga table.

Given Porto’s form, the match on Friday presents a perfect opportunity for Sporting to inflict the first defeat on Porto while also cutting their lead at the top of the table to just 3 points.

Porto are unbeaten all-season, after 21 rounds of Primera Liga fixtures. They have dropped only four points in this run courtesy of two draws.

They have won all of their last ten matches in the Primera Liga.

Their cutting edge is pronounced by the 55 goals they have plundered this season compared to the 14 they have conceded so far.

In their last 5 outings in the Primera Liga, Porto have won five, scored 14 goals, and conceded 5 goals in the process.

Sporting have suffered their first two defeats of the season within the last 5 outings in the Primera Liga. In this run, they have won three and lost two.

Given that they have two draws across the season like Porto, these two defeats have been the difference between first and second on the Primera Liga so far.

Sporting have scored 11 goals in their last 5 outings, conceding 6, and keeping two clean sheets. This shows that they have robust strengths that can hurt Porto on Friday in the top-of-the-table double header.

Having lost Luis Diaz to Liverpool in the January transfer window, Porto will have to recalibrate their season without him, and replace his goals and energy upfront as they chase the title.

Porto will also have to do without right-back Wilson Manafa, who is nursing a ruptured patella since December 31st.

The team also has right-back Joao Mario, central midfielder Bruno Costa, and defensive midfielder Mateus Uribe, facing the risk of suspension with 4 yellow cards each. Otherwise, they are all available for the clash against Sporting on Friday.

Right-back Pedro Porro is yellow-card suspended, which means he will not be available for selection in the clash against Porto on Friday.

The attacking midfielder will be crucial as Porto seek to fill the gap left behind by Luis Diaz. Otavio brings pace, energy, work ethic, and goals into this Porto team. These attributes will be important for Porto in the match against Sporting.

The Spanish professional, who is on loan from PSG, will be crucial when Sorting take on Porto on Friday. His goals, pace, and creativity will be central to how Sporting will play.

Expect Porto to control possession, whereas Sporting will seek to attack strategically without over-exposing their defence to the Porto attack.

Porto are favoured to win and take all three points from this fixture on Friday.

Make sure to bet on FC Porto vs Sporting with 22Bet!