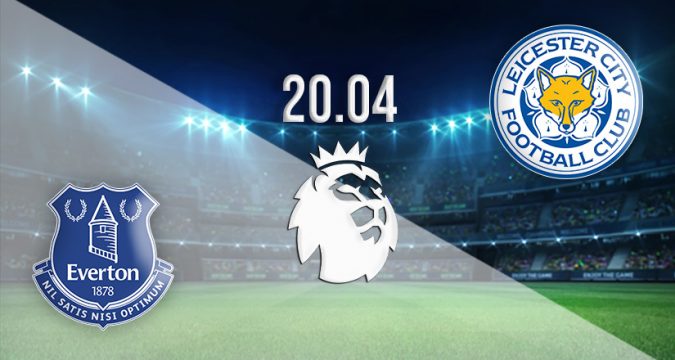 Everton’s stay in the Premier League is still under threat at this late stage of the campaign. They will be looking for a second straight victory in the English top-flight on Wednesday evening, as they come up against Leicester City. The Foxes lost their previous fixture, but have still won twice in their previous four.

It will be a huge final month of the season for Everton, as Frank Lampard looks to ensure that his side remain in the Premier League. Everton have never been relegated from the English top-flight, and have never been this close to dropping out. The Toffees are currently 17th in the overall standings, and have picked up 28 points from the 30 games that they have played.

They have games in hand over the sides around them, and are just three points ahead of Burnley. The Toffees picked up a huge victory in their previous fixture, as they managed to hold on to a 1-0 success against Manchester United. Lampard will be hoping that victory is a significant building block ahead of the final eight games of the 2021-22 season, as relegation to the Championship would be one of the most embarrassing moments in Everton’s history.

Leicester City are currently in the top half of the Premier League standings, but they will need to bounce back after being beaten by Newcastle United in their previous fixture. That defeat almost certainly ends their hopes of finishing in a European position this season, as they now sit 14 points off sixth-placed Arsenal.

The Foxes have lost twice in their previous five fixtures in the Premier League, and have picked up two wins during that period. Instead, their focus in the final month or so of the season may be on the Europa Conference League, as they reached the semi-final stage with victory over PSV last week. Victory in that competition would mean qualification to the Europa League, which would be a pleasing end to a disrupted campaign.

Everton are unbeaten in their previous three league fixtures against Leicester. They have won twice during this period, but a draw was the outcome in the previous meeting this campaign. Leicester’s latest win against Everton came in December 2019, as they won 2-1 at the King Power.

Leicester’s focus over the final month of the season will be on the Europa Conference League. That will give Everton an excellent chance of taking the points on Wednesday evening, and I could see them picking up a vital 1-0 win to improve their survival hopes.

Make sure to bet on Everton vs Leicester City with 22Bet!