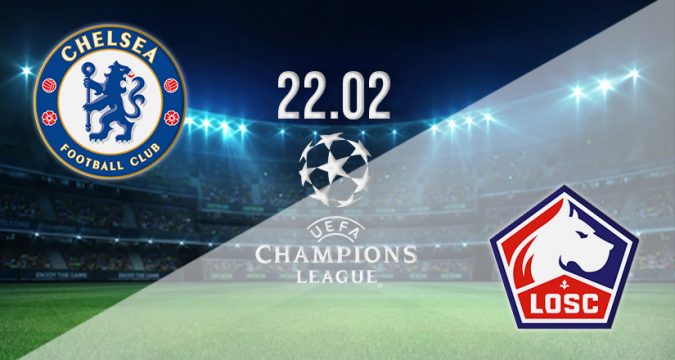 Stamford Bridge in London plays host to one of Tuesday’s two UEFA Champions League fixtures. English Premier League side and current European champions Chelsea host French Ligue 1 outfit Lille in this exciting Round of 16 match. The Blues enjoy the home advantage for this first leg and will be eager to make it count as they bid to successfully defend the trophy. There is no away goal rule this season, meaning a win of any description will give the Blues the edge heading to Lille.

The home team appear to be out of the Premier League title race as Manchester City and Liverpool prepare for a grandstand finish. With a place in the top four looking safe, the home team can afford to give this tournament the attention it deserves. Lille knows their hosts are the current champions of Europe but haven’t been at their best so far this year. The Ligue 1 club will want to ensure the tie remains live, returning to France for the second leg.

When browsing the history books, we note Chelsea and Lille have met only twice before in competitive action, with the Blues holding a 100% record. Those games were played in 2019 when Chelsea grabbed a pair of 2-1 wins. The game in London was won thanks to goals from Tammy Abraham and Cesar Azpilicueta. Will we see a third win on the bounce, or can Lille begin the fightback?

Chelsea struggled during the festive period and are now 13 points behind current league leaders Manchester City with time running out to close that gap. The Blues are making ground on the Cityzens, who appear to have dropped their standards in the last few weeks, but the general feeling amongst football fans at present is that Man City or Liverpool will win the league. That’s not to say Chelsea will throw in the towel in the weeks ahead. It will be interesting to see how the club juggle their Premier League and Champions League commitments as we race towards the business end of the season.

The home team prepare for this match, having suffered a mixed bag of results in their last few league outings. They have won two, drawn two and lost one of their last five outings but appear to have found their feet of late. Chelsea is unbeaten in their last three league games, following a draw with back to back wins. They finished level in Brighton, which was a hurtful result but responded by beating Tottenham 2-0 at this venue in the London derby, then edged another neighbour in Crystal Palace at the weekend, beating the Eagles 1-0.

In addition to their Premier League improvement, Chelsea was crowned Club World Cup champions. The winner of the Champions League added the World Cup to their recent trophy haul, beating Al-Hilal 1-0 in the semi-finals before edging Palmeiras 2-1 in extra time to lift the trophy. It was an amazing achievement and one that will give the squad real encouragement heading into this match. There’s an unwavering confidence in the home dressing room, and this match comes at the right time for Chelsea.

Lille are enjoying their Champions League adventure on the back of a stunning season, but it appears to have come at the expense of their domestic form this term. They won’t get anywhere near finishing in the top four this year and a midtable finish looks more likely following a woeful winter. Their only chance of playing Champions League football next season comes from winning the trophy this season. A big ask, of course, but they remain in the running at this point.

In the French Ligue 1, Lille are currently down in 11th place, much closer to the relegation zone than leaders PSG. Their stats for the campaign read nine wins and nine draws against seven defeats with 32 goals scored and 35 conceded. They carry to England recent form of two wins, a draw and two defeats but are unbeaten in their last two. The visitors have taken four points from the six available to them in their games. That may just help boost team morale ahead of this trip.

We last saw Lille in action on Friday night when they were held to a goalless draw at home by Metz. That was a match they were expected to win but couldn’t find the net despite creating plenty of chances. They beat Montpellier 1-0 in their last road trip but that result came on the back of a 5-1 mauling by league leaders PSG suffered in front of their own fans.

Chelsea has the home advantage for this match and it’s easy to get excited about their chances of winning. They are the current Champions League winners, the current Club World Cup champions and head into this match on the back of a strong run of form. The locals will aim to win this game and put the tie to bed before heading to France for the second leg.

Lille know they are stuck in the thick of a dreadful run of form and their domestic season is close to being a write off. Their only hope of success is winning the Champions League but they appear to be one of weaker teams left in the running. Their best chance of pulling off a famous upset and eliminating the champions comes from ensuring the tie remains live heading back to France. They must keep the scores low and hope to get at least one goal of their own. They must be strong in defence and clinical in attack if they are to worry the home team and keep things interesting.

The pre-match betting odds available at 22bet have Chelsea priced at 1.288 with Lille 11.5 and the draw 5.25. There are also other specials markets, like Chelsea to win to nil, handicap, half time/full time, total goals, first goalscorer and more.

Make sure to bet on Chelsea v Lille with 22Bet!