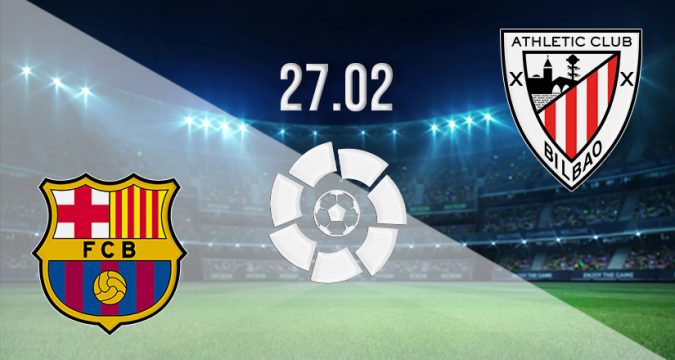 After sealing qualification to the Europa League round of 16 draw with an impressive 4-2 win in Napoli, Barcelona will turn their attention to La Liga when they welcome Athletic Club to the Camp Nou on Sunday at 21:00 GMT.

Can Barcelona Maintain their Upward Momentum in La Liga with a Win against Athletic Club?

Barcelona’s impressive upturn in form continued last weekend with a 4-1 demolition of Valencia at the Mestalla Stadium.

This run was confirmed in Naples, where they beat the hosts Napoli 4-2 to book their place in the round of 16 in Europe’s second tournament.

Xavi’s side will be looking to maintain their nine-match unbeaten run since their 1-0 reverse against Real Betis.

They will face an Athletic Club side that are also experiencing an upturn in form, which means that Barcelona’s credentials will be examined on Sunday.

Can Athletic Upset Barcelona and Make it Two Consecutive Wins in La Liga?

Athletic club bounced back from a surprising 3-2 defeat to Mallorca with an impressive 4-0 hammering of Real Sociedad.

The Basque club will be looking to maintain their good run of form when they come up against the Blaugrana on Sunday.

With four wins, a draw and one loss from the last six rounds of La Liga fixtures, Athletic Club will be confident when they step out onto the Camp Nou turf on Sunday against an in-form Barcelona side.

Xavi’s side will be looking to extend their unbeaten run to ten matches. In the last nine outings, the Blaugrana have won five and drawn four.

In the last six rounds of La Liga outings, Barcelona have been the most in-form side in La Liga with 14 points out of the available 18.

This run includes four wins and two draws. This has seen the Blaugrana move up the table into the top four. Barcelona are level on points with Atletico Madrid (in fifth place) but have played a match less.

Athletic Club have won three matches, drawn one, and lost, over the last five outings in La Liga. In this run, they have collected 10 points and dropped five.

This run has seen them rise up the table to 8th with 27 points, only five points behind fourth-placed Barcelona.

This means that Athletic Club are still in with a shot of fighting for a top-four position, and thus gaining Champions League qualification next season.

Left winger Ansu Fati will be unavailable for the clash with Athletic club; the 19-year-old is recovering from a hamstring injury, and is expected back in March.

Forward Memphis Depay is also side-lined with an Achilles tendon problem and will miss the Sunday match.

Jordi Alba is suspended for the match and will be available for La Liga action on February 28th, 2022.

Athletic will be without right winger Nico Williams for the clash with Barcelona on Sunday.

The 19-year-old is nursing a hamstring injury he suffered on February 4th, 2022.

The former Manchester City ace is slowly acclimatising to life back in La Liga. He has massive quality and potential to make him one of the brightest prospects for Barcelona.

Coming up against an in-form Athletic Club side, Torres will be crucial for Xavi’s side from the sides or through the middle.

The Athletic Club striker offers pace, movement, dynamism, and finishing upfront for the club. This was demonstrated by his performance last week in Athletic’s 4-0 win over Real Sociedad.

Athletic Club will need that mobility and dynamic play, alongside Garcia, to trouble the Barcelona defence on Sunday.

Expect Barcelona to dominate possession and play on the front foot in front of the Camp Nou crowd.

Expect Athletic Club to remain solid and attack through transitions.

A Barcelona win is the favoured result for this fixture.

Make sure to bet on Barcelona vs Athletic with 22Bet!