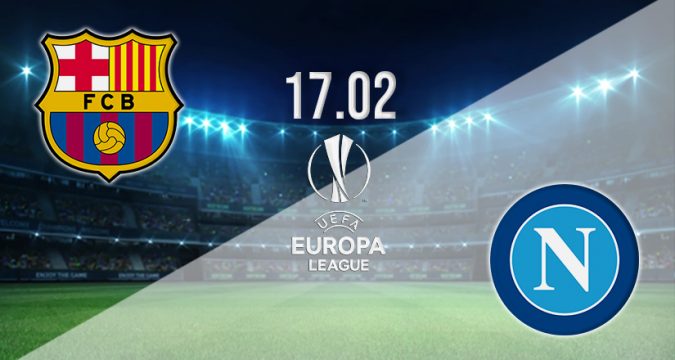 Following two days of action from the UEFA Champions League on Tuesday and Wednesday, the Europa League gets the chance to shine on Thursday evening. It’s the round of 32 and a playoff involving the third-place finishers in the Champions League group stages and the runners up of the Europa League pools. This seasons’ Europa League is boosted by some of European football’s top teams, including Barcelona and Napoli, who clash in Spain from 17:45 GMT. Both sides would prefer to be playing in Europe’s elite competition but now hold hopes of winning this trophy. It would come as no surprise to see the Europa League winners come out of this game.

Barcelona is the main attraction in this season’s Europa League, having disappointed in the Champions League and dropped down a level. It will be interesting to see how seriously they take their Europa League games as the team also have a fight on their hands to finish in the top four of La Liga. It’s unlikely they will challenge leaders Real Madrid for the title in the coming weeks, but it is crucial that they make it to next season’s Champions League. That may cause them to see this match as a distraction.

Interestingly, these teams met in the summer of 2020 when Barcelona won 3-1 at home thanks to goals from Lenglet, Messi and a Suarez penalty which was more than enough to better a reply from Insigne, who also scored from the spot. The teams have met only twice before, with the first game played in Italy ending in a 1-1 draw. Mertens found the target after 30 minutes of that game before Griezmann fired an equaliser just before the hour to level up. There was late drama as Vidal was sent off just before the full-time whistle. Armchair fans hope for more drama and goals in this renewal, but there will be tension in the air as this is the first leg.

Barcelona struggled to adjust to life without Lionel Messi early in the season following the Argentine’s departure to PSG. The La Liga giants were forced to sell their highest earner and club legend in a bid to lower their spend and bring it in line with financial fair play laws. Pundits were unsure what to expect from Barca in La Liga, especially following that poor start, but they have found their feet and are back in the running for a top-four finish. Fans hope the club have finally found their feet again and are ready to kick on. A top-four finish would be seen as a decent return for this season, allowing the club to build for next term.

Despite sitting fourth in the league, level on points with Atletico Madrid in fifth and just three better than Villarreal on seventh, Barca are on a decent run of form and are unbeaten in their last five league starts. That spell consists of three wins and a pair of draws, with two of those victories falling in their three most recent outings. Barca recorded back to back wins over Alaves on the road at the end of January and Atletico Madrid at home in their first outing this month. The latter finished 4-2 in a thrilling contest with six goals scored and a sending off for the victors. The goals that day were scored by Alba, Gaviria, Araujo, and da Silva.

Despite putting four past the champions in that win, Barca’s defence remained fragile, and they have now conceded two goals in each of their last two games. They were last seen in action fighting out a 2-2 finish away to Espanyol on Sunday. That game was even more entertaining, with four goals scored and almost as many red cards shown. Barcelona had Pique sent off while Espanyol finished without Melamed and Arino, all three seeing red in stoppage time. The home team know they can’t afford a repeat of that ill-discipline.

Napoli makes this trip on the back of a stunning run of form that has seen them go unbeaten in their last five league matches, winning four and drawing one in that period. Their ruthless form has lifted them to third in the division, and they are part of a three-horse race for the Serie A title, hanging on to the coattails of AC Milan and Inter Milan. They have 53 points on the board, which is just two points less than pacesetters AC Milan after 25 games played. Inter Milan are sandwiched between the pair but have a game in hand. That race is expected to go down to the wire.

Napoli reeled off four wins on the bounce before slipping to a draw last time. They opened this month with an impressive 2-0 away win achieved against Venezia and know a repeat performance is likely to be enough to send them through in this tie. Still, the level of opposition is different. Napoli knows they must be at their best to take anything from Spain. Ensuring the tie remains competitive heading back to Italy is the priority here. Osimhen and Petagna sealed the points that day, but the second was scored 10 minutes into stoppage time.

Napoli was last seen in action on Saturday in Serie A when playing out a 1-1 draw at home to title rivals Inter Milan. That was a match they would have wanted to win, given the home advantage, and they took the lead inside seven minutes thanks to a goal from Insigne, who slotted home from the penalty spot. That advantage remained in place until the 47th minute when Dzeko struck a leveller. Despite both sides having chances to win it, a draw was a fair result and one that Napoli will take heart from given their performance.

It’s difficult to know what to expect from Barcelona in this competition. They may see winning the Europa League as another route into next season’s Champions League, as Man Utd did under Jose Mourinho, or they may prefer to rest their top players and concentrate on securing that top-four finish in La Liga.

Napoli knows they can’t afford to leak too many goals in Spain, but they are always aware that they’ll get their fair share of chances to score off a generous Barcelona defence. This should be an entertaining and interesting first leg.

Make sure to bet on Barcelona v Napoli with 22Bet!