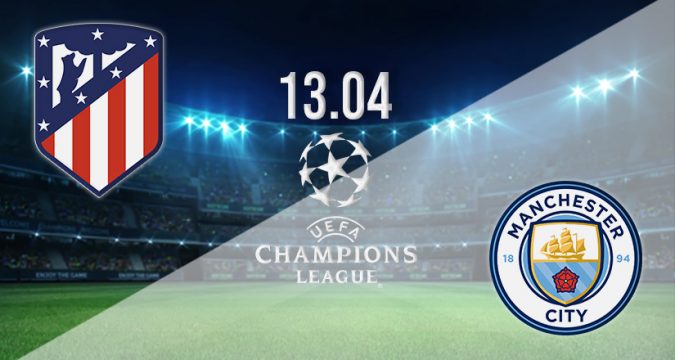 What a game we have in store on Wednesday from 20:00 GMT as the champions of Spain meet the champions of England in this UEFA Champions League quarter-final second leg. The Premier League outfit hold a 1-0 aggregate lead following last week’s meeting at the Etihad Stadium, but there’s still all to play for here. The La Liga outfit now enjoy the home advantage on Wednesday and will believe they have what it takes to make it count. Atletico know they got off lightly in Manchester with that 1-0 defeat, and there’s now everything on the line. Score first, and Madrid will be right back in it.

It’s a wonderful advert for this competition to see the best two teams from their respective nations clash in the latter stages. Atletico Madrid may have fallen off the pace in La Liga, and it’s looking increasingly likely that they’ll be forced to hand the league trophy across the city to their oldest rivals in Real Madrid come the final count. That allows Atletico to focus on winning this competition while Man City aim to go one better than last year when they were beaten in the final by Chelsea. A nervy but entertaining match lies ahead.

When reading through the history books, we note that Atletico Madrid and Man City have met in competitive action only once previously. It was that narrow win for Pep Guardiola’s team in England just over a week ago. Madrid have never beaten City, but that could all change, and if they do defeat the English side, they will know the win would come at exactly the right time. Which way will this match go? Our team of football writers aim to find out in this in-depth preview.

Madrid are on a losing streak

Atletico Madrid enter this season-defining match on the back of a first-leg defeat and a recent losing streak of form. The Spaniards can be found well off the pace set by Real Madrid in La Liga, and there’s now no question they will be losing the title they worked so hard for last season. Following the latest round of fixtures from La Liga, Atletico Madrid can be found down in fourth place, already 15 points behind Real Madrid. They have 57 points on the board, which is just one point better than Real Betis down in fifth place and three points better than Real Sociedad in sixth. A top-four finish is a must for Atletico as it will grant them entry into next season’s Champions League.

Atletico were last seen in action in La Liga when suffering what was their eighth league defeat of the season. Madrid went down away to Mallorca, an opponent they were expected to beat quite comfortably. Atletico aren’t anywhere near the level we saw from them last season, and we know they won’t be pushing their city rivals or Barcelona for the major places like they did 12 months ago. Still, Mallorca is a team they really should be beating without too much fuss. That game was won by a single goal scored by Muriqi from the penalty spot with 68 minutes on the clock, and Atletico lacked the composure in attack to get level.

During that loss to Mallorca on Saturday, Atletico Madrid had 68% of the ball possession and nine shots at goal but managed just one on target. Mallorca, who are in the running to be relegated this season, had just 32% of the ball possession, but they did create ten shots at goal with three on target. That raises a red flag over Madrid’s ability to turn possession into goal scoring chances and then chances into goals. The attack must perform much better in this match if they are to stand any chance of claiming the win. Do they have what it takes?

Man City are ahead

Manchester City are ahead in this tie and hold the advantage thanks to that narrow 1-0 win recorded at the Etihad Stadium last midweek. The Cityzens were expected to win that match, and they lived up to the pre-match hype, but the English champions and current Premier League leaders were made to work for every minute of the first leg. A 1-0 win isn’t ideal, and Pep would have hoped to see his side score at least another goal to give them a first grasp of this tie, but they do have an aggregate lead and possess the skills and style to finish the job in Spain.

A win here would see them progress to the semi-finals at the expense of the champions of Spanish football, and that would be a real feather in the cap of last season’s runners up. If Man City score the first goal in this game, it would be fair to assume they will go through, although if Atletico Madrid get the opener and they score it early enough, all the pressure will be lifted from the shoulders of the home team and placed on the visitors. That means City must be organised in defence and creative in attack. They can’t afford to be too gung-ho in their approach.

Manchester City were last seen in action on Sunday afternoon at the Etihad Stadium when they battled to a useful 2-2 draw with Liverpool in the league. That share of the spoils meant Man City remain ahead on 74 points with Liverpool breathing down their necks on 73 points, poised to strike if the pacesetters stumble during the run-in. City have now won one and drawn two of their last three league starts, which will give encouragement to their opponents, but Guardiola knows another level finish would be a decent result.

Atletico Madrid know they must win this match, and anything less will see them exit the competition. With the club in danger of missing out on the top four in La Liga and spot in next season’s Champions League, the players will be well versed in what’s expected of them here.

Man City are in control and know they have the ability to put this tie to bed early. Score the first goal of the game, and the fans will begin to make their arrangements for the semi-finals.

Make sure to bet on Atletico Madrid v Man City with 22Bet!