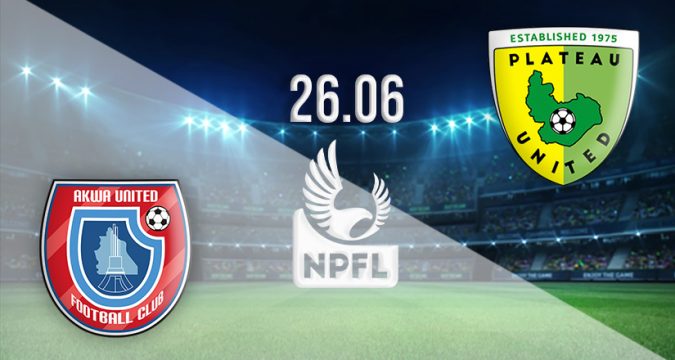 Second-placed and title-chasing Plateau Utd will travel to the Godswill Akpabio Stadium to face the mid-table hosts Akwa United on Sunday at 16:00GMT as they look to win the match (and hope Nasarawa beats Rivers Utd) to prevent the league leaders from clinching the title with three matches to spare.

Can Akwa United Bounce Back to Winning Ways with a Victory on Sunday?

Akwa United, who are the outgoing champions in the NPFL, have fared poorly in the title defense this season. They are currently 8th on the log with 48 points, which is 23 points behind league leaders.

Although they are not threatened by relegation, Akwa United are just 8 points ahead of 18th-placed Dakkada, which indicates that they are closer to the drop zone than the league leaders.

Akwa will be focused on returning to winning ways after they were comprehensively defeated by Dakkada (3-1) away from home last time out in the NPFL.

They have fared slightly better when playing in front of the home crowd, which will provide a crucial backdrop to the clash with Plateau Utd on Sunday.

Can Plateau Get Back to Winning Ways after Two Winless Matches in the League?

Plateau Utd’s stop-start run of form has seen them largely surrender their title race as a massive 10-point gap has emerged between them and league leaders Rivers Utd, who could clinch the title this weekend.

The second-placed side on the NFL log have gone two matches without a win, which means that they will be desperate to get back to winning ways as they seek to finish this season on positive form.

With four matches remaining, there is a realistic chance of dropping into third on the table and missing out on an African Champions League stab.

Therefore, Plateau Utd will be focused on winning the match on Sunday to delay Rivers Utd from clinching the title on Sunday while also ensuring that they can finish runners-up this season in the NPFL.

Akwa United have won just once in their last five matches in the NPFL, which highlights their slump in form in recent matches as their title defense fizzled out and was all extinguished by mid-season.

The team has also lost three times and drawn once in this run. This means that they have collected four points and dropped 11 in the process.

The only win in this five-match run came in the home match against Remo Stars, which finished in a 1-0 win for the home side.

Plateau Utd have won twice, drawn once, and lost twice in their last five outings in the NPFL. They have dropped 7 points in this run, which enabled league leaders – Rivers Utd – to open up a ten-point lead at the top.

The two wins for Plateau Utd came in home matches against Enugu Rangers (4-0) and Kano Pillars (1-0). The draw was also in a home match against Gombe United last time out (last Sunday), which ended in a 1-1 score line.

The two defeats came in away matches against Shooting Stars (2-1) and Rivers Utd (2-0). The loss against Rivers was especially devastating because they failed to close the gap in the six-pointer.

Ubong has been the leading striker for Akwa this season with 26 appearances, 4 goals, and 3 assists.

He will be crucial for the team as they seek to win the match on Sunday against Plateau Utd.

The right-winger has five goals in 19 appearances for Plateau Utd this season. His pace and creativity will be crucial for the team as they look to maintain their second spot on the table.

Akwa United will approach this match with solidity and compactness as they will focus on isolating the Plateau strikers and cutting off the supply from midfield.

Plateau Utd will look to play vertical through fast passing across midfield or passes from deep in behind the Akwa defense.

Plateau Utd will win the match and get back to winning ways in time to seal a second place on the table.

Make sure to bet on Akwa United vs Plateau Utd with 22Bet!