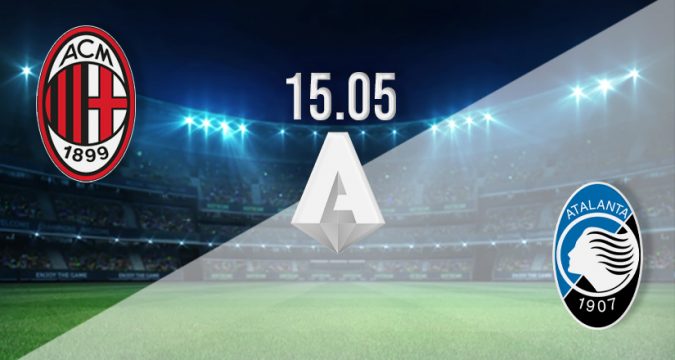 AC Milan’s last home match of the season at the San Siro, and the penultimate fixture of their title-chasing season, takes place on Sunday when they host eighth-placed Atalanta at 17:00GMT.

Can AC Milan take One More Step towards the Title with a Win?

With two matches remaining in the Serie A season, AC Milan are leading their nearest challengers Inter Milan by two points.

Stefano Pioli will be looking to ensure his side take maximum points from the remaining two matches, which will be enough to make the Champions no matter what Inter Milan do.

The match against Atalanta will be crucial for Pioli and his men as they try to stave off the challenge by the recently crowned Coppa Italia champions.

Can Atalanta make it Five Serie a Matches Unbeaten?

Atalanta will be disappointed with their current eighth position on the table. A season that promised so much for Gian Piero Gasperini’s men has fizzled out due to poor form and inconsistency.

However, Atalanta will have an opportunity to have a say on the destination of the title this season when they face league leaders AC Milan on Sunday at the San Siro.

Gasperini’s men are currently level on 59 points with Fiorentina (7th on the table) and Roma (6th on the table), which means a victory could potentially lift them to sixth and guarantee the Europa League participation next season.

The Rossoneri are unbeaten in the last five Serie A outings; they have won four and drawn once in this run and thus collecting 13 points out of the available 15.

This run of form has helped them maintain their position at the top of the league and a gap of two points ahead of second-placed Inter Milan.

Gasperini’s men are unbeaten in four matches, winning twice and drawing twice. In their last five matches, they have lost just once and thus collected eight points out of the available 15.

Atalanta will be looking to make it five matches unbeaten in the league as they seek to climb the Serie A table.

Stefano Pioli will be without centre-back Simon Kjaer who ruptured his cruciate ligament on December 1st, 2021.

Otherwise, Milan will the full complement of their squad available for selection ahead of the clash with Atalanta on Sunday.

This will come as a boost to Stefano Pioli as he seeks to bolster his team’s push for the title with just two matches remaining in the Serie A title.

Gasperini will be without centre-back Giorgio Scalvini who is sidelined with thigh problems since May 2nd, 2022.

The French striker has been a revelation for the Rossoneri this season; he has grabbed nine goals and three assists in 32 appearances.

He is an important reference point upfront for AC Milan and helps other attacking players by linking up play superbly.

Giroud will be crucial in Milan’s match against Atalanta.

Apart from the goal threat, Pasalic is a crucial playmaker for Atalanta’s attacking threat and is the central player through which most of the team’s play revolves.

Pasalic will be crucial for Atalanta if they are to take anything from the San Siro on Sunday.

AC Milan will look to take the initiative in this match by dominating possession and the tempo.

Atalanta will adopt a proactive approach to this match by pressing high up the pitch and attacking vertically when they are in possession.

AC Milan are favoured to win this match and take a step closer to winning the Serie A title.

Make sure to bet on AC Milan vs Atalanta with 22Bet!